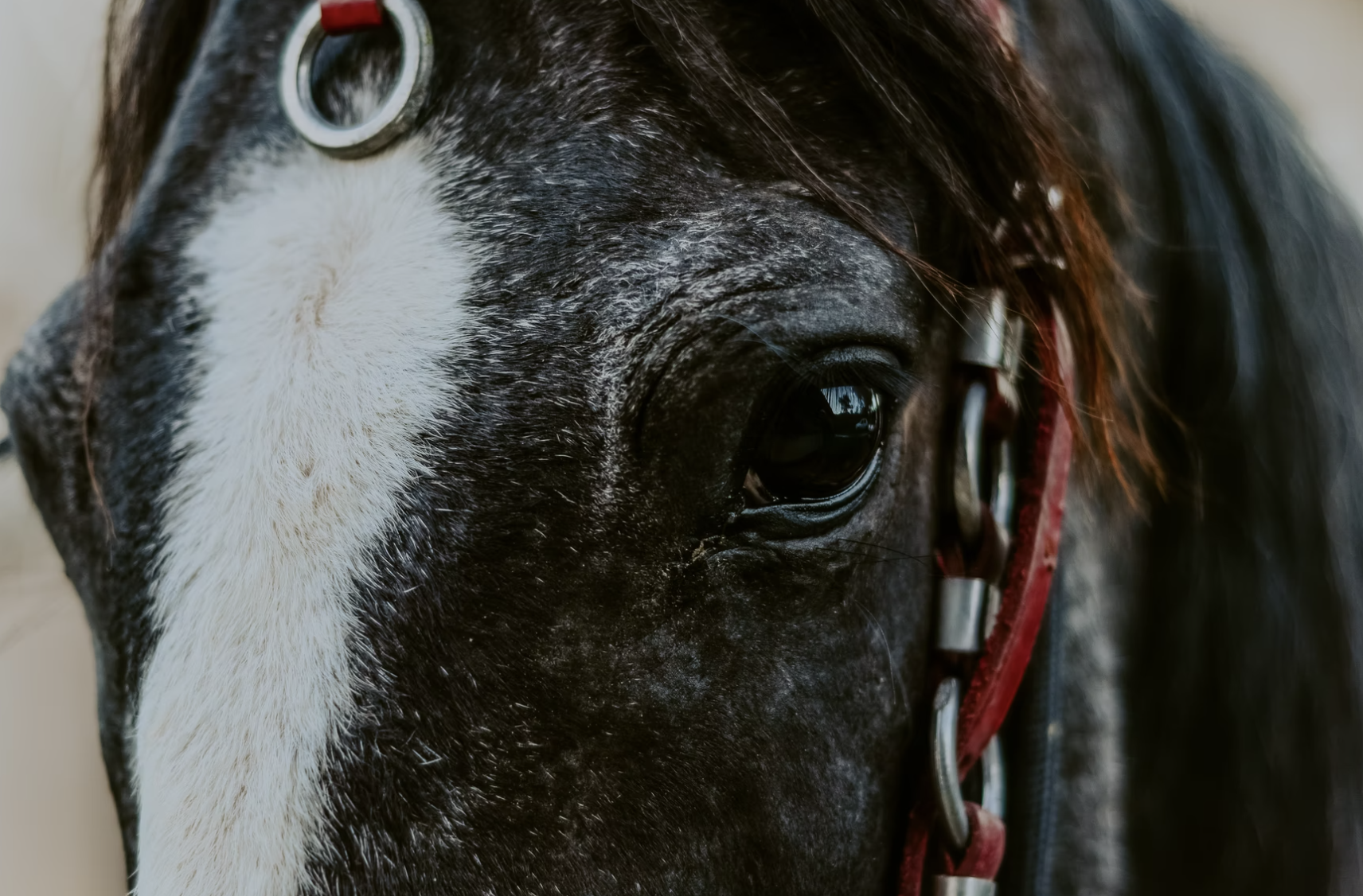 Black and white horse breeds are some of the most beautiful in the world. Giving the impression of being ready-made for a suit-and-tie event, breeds with this coloring truly stand out, particularly in horsing events. But what breed is a black and white horse? Well, there isn’t only one answer to this question — there are several!

In this post, we’ll take a look at some common horse breeds with a black and white color combination. We’ll explore a little about the history and traits of each breed. Bear in mind that the temperaments of each breed discussed here are only generalizations — each horse is an individual with its own personality!

Shetland ponies are known for their small stature, but don’t let that fool you. They are pretty tough and have been used throughout history as a working breed. As their name suggests, they originate from the Shetland Islands in Scotland. They were kept for working the land and in the coal mines from 1847.

Shetland ponies adapted to the brutal weather conditions of the Shetland Isles, which adds to their reputation as a study breed despite their size. Shetland ponies are a popular breed for children and smaller riders. This could also be due in part to their generally placid, easygoing natures.

These ponies come in a range of colors and patterns, including black and white.

Appaloosas first came to the Americas in the 1600s when Spanish settlers brought them over from Europe. They were later bred by the Nez Perce tribe. Appaloosas are famous for their beautiful spotted coats — the patterns of Appaloosas are bay blanket, bay roan, dun with roan blanket, leopard, grulla blanket, chestnut blanket, red roan blanket and dun blanket.

The interesting thing about this breed is the range of spotting patterns and how they manifest. For example, an Appaloosa with a leopard pattern has spots all over its body, whereas an Appaloosa with a blanket with spots pattern would have a large white patch with darker spots within it.

Appaloosas have varied temperaments. They are an intelligent breed that likes to develop a bond of trust with their owner. If you betray the Appaloosas trust, for example by mistreating him, he is very unlikely to forget. If well-cared for and treated, the Appaloosa, like any breed, will be a gentle, loyal and faithful companion.

As the world’s largest horse breed, the Shire horse is easily recognized by its massive size. According to The Shire Horse Society, the Shire once worked as a warhorse, carrying knights in heavy armor and later reprised this role in the world wars, dragging artillery in horrendous conditions.

The Shire is famous for its history of being a hard worker, having also been used in farm work and for pulling barges down canals. Now, the Shire horse is known in the horse community as a gentle giant, perfect for all kinds of riders. You may be surprised to learn that the Shire, despite its size, is also recommended for novice riders.

This is because the Shire has a generally docile, gentle nature and gets along well with people. Of course, this is dependent on many factors, as with any breed, but a well-treated Shire will usually be a loving, patient companion to its human friends.

Another large horse breed, the Clydesdale originated in Lanarkshire, the old name for which was “Clydesdale”. The Clydesdale, like the Shire, was often used in farm work and was also well-suited to city work in the past.

The Rare Breeds Survival Trust in the UK expresses deep concern for the breed, mentioning that the number of Clydesdales being registered is “worryingly low”. They fear the extinction of the breed within ten years if action is not taken.

Clydesdales are often bay in color, though other colors, including black, also occur. They have white patches on the face and feet in particular. In terms of temperament, it is known generally as being similar to the Shire horse — gentle and easygoing with humans. This depends on the horse in question, however — not every Clydesdale is the same!

Like the Appaloosa, the Paint Horse is the descendant of horses brought to North America by Spanish settlers and explorers. They were later popular with Native Americans. It shares ancestry with thoroughbreds and American Quarter Horses. American Paint Horses are known for their stunning coloration and coat patterns — they are a combination of white and another color.

They are also known for their athleticism and ability to handle a range of tasks. Paint Horses can be very versatile, good for trail riding, dressage, casual riding and cow herding or other ranch work. Hardworking and eager to please, the Paint Horse is ideal for experienced riders and novices alike.

The Knabstrupper originated in Denmark. It is believed to share common ancestry with the Appaloosa, which also shares the “leopard complex”. Equine World also mentions that the two breeds share color patterns and that the spotting patterns include leopard spot, near leopard, spotted blanket, white blanket, snowflake, frosted hip, marble, few spot and few spot leopard — that’s quite a lot of patterns!

The Knabstrupper’s coloring and pattern combinations remind us of a dalmatian dog — it is elegant, beautiful and unique. You’re very likely to find a Knabstrupper getting a lot of attention at horse events simply because they’re so eye-catching. The Knabstrupper is commonly regarded as intelligent, vibrant, even-tempered and willing to learn.

This blend of characteristics makes for a temperament often suitable for all kinds of riders, from novices to experts.

This horse breed originates from Great Britain and Ireland. They share ancestry with Shire horses and Clydesdales, which made the wonderful mix that is the Gypsy Vanner Horse. In the past, they were used by European travellers to pull the caravans that they lived in. They were first introduced to North America in the 1990s.

Gypsy Vanner horses are one of the smaller horse breeds, with an average height of between 14 and 15 hands. However, don’t underestimate the Gypsy Vanner — they were bred for work and this history makes for a strong and sturdy breed today. The Gypsy Vanner is patient, calm and gentle, making it an ideal breed for children and novice riders.

The Irish Draught horse is Ireland’s national horse. It was originally bred as a working horse for farms and was later used in war. They were in high demand during World War One, as armies were in need of cavalry horses that were sturdy enough to handle the conditions of war.

This breed of horse is known for its easy gait, energy and generally friendly, quiet temperament.

The Mustang horse first arrived in America after 1500, like a few other horses on this list. It is a free-roaming horse breed that can be found in herds on grasslands, plains and deserts. They are mostly found in Western America. While Mustangs are known today as a wild breed, they descend from a “domestic population”.

The average size of a Mustang is between 14 and 15 hands tall and is of a muscular, athletic build. They have short backs and narrow chests. Mustang horses come in a range of colors — you can probably find Mustangs in pretty much any color, including black and white.

While Mustangs have a reputation for wildness, some are born domesticated. A Mustang taken from the wild is more likely to need an experienced horse trainer to tame them, though their personalities and temperaments can vary, like any breed.

As we can see from the list above (which is in no way exhaustive!), there is most certainly no single answer to the question “What breed is a black and white horse?”. There are so many beautiful breeds that could come with this color combination. If you’re looking specifically for a black and white horse, we hope this list will give you some ideas! Feel free to check out our article “How Many Horse Breeds are There?” to find out more.