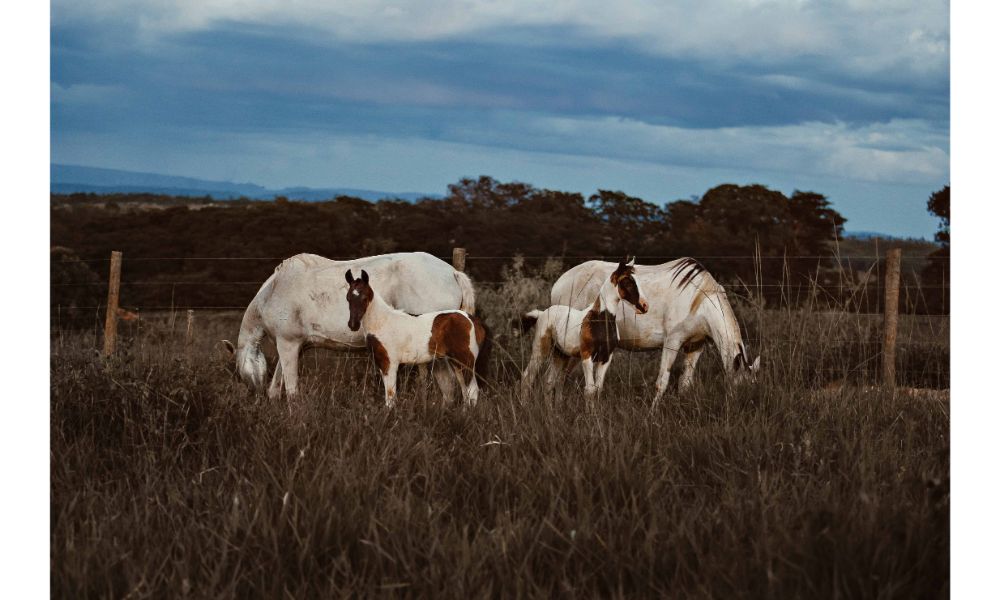 Every mammal has a high chance of giving birth to healthy twins. So, can horses give birth to twins? Horses have rare occasions of having successful twins birth. However, in most cases, both foals die or even the mare.

It’s rare to find twin fetuses in horses. More unusual is the mare carrying the twins to term and giving birth to healthy foals. In most cases, twinning in animals has more risks than benefits.

Though a horse giving birth to twins is rare, many horses carry twins. There are 0.5 million horses born in the US. Only one out of 10,000 can have twins with lower chances of delivering them alive.

Statistics show that twenty percent of horses can successfully deliver twins. That is if they have passed two months after conceiving since most horses lose their pregnancy at that stage. Unfortunately, in the first 14 days, one or both foals may die.

Surprisingly, the horse gave birth to another pair in late 2019, healthy and still on track to date.

A horse that gives birth to twins signifies low reproductively. The horse may abort the pregnancy before birth, have a stillbirth, or lose the foal after birth in the first few weeks.

However, you can manage the twins earlier before the complications occur. Twin management will require early pregnancy diagnosis to take early measures.

Unlike horses, twinning in most mammals occurs when an ovulated egg splits, forming two embryos. Only one follicle is responsible, and the outcome is usually identical twins. In a horse, ovulation occurs in two fertilized eggs. It entails two sacs, and the resulting pair is not similar.

Stallions produce sperms that have low surviving rates. So the ovulated eggs can separate on the same day of fertilization or a few days later.

If a horse gives birth to twins, there are higher chances of having another pair in the future. That means ovulation multiplies in several cycles, which can happen again.

Abortion in twin pregnancy occurs in a former barren mare. According to horse experts, twin pregnancies have a 30% chance of abortions. However, if no abortion occurs and the embryos grow, they will compete for the mare’s uterus space. As a result, one fetus dies anywhere between five to nine months.

The surviving foal that the horse gives birth to usually has many complications. They grow slowly, are weak, and get infected easily. However, one can apply twin reduction to minimize the chances of abortion.

The reduction cannot happen naturally before the ninth day. That’s why the embryos are detected at this phase since they are still moving. It also allows manual reduction where one crushes one embryo using tools. After the procedure, you should fix the blisters in 16 days during pregnancy. However, the rate at which the foal survives depends on the process.

You can reduce twins naturally by eliminating the excess embryos and allowing one to grow. You can either fix the embryos jointly or on one side. However, the possibility of a horse giving birth to a single foal through natural reduction is 64%.

Several factors may influence natural reduction. These include the size between the embryos, ovulatory follicles synchronicity, and embryo relative orientation.

Manual reduction happens after fixing the vesicles – that is, less than sixteen days after ovulation. It’s successfully the phase. However, if the twin embryos appear as one, the process will likely damage both embryos.

During the manual process, you are advised not to break the blisters of the embryos. The recommended way to get rid of the embryo is to slip the uterus and the vesicle wall until the fluid looks wooly. However, if you don’t observe the proper procedure, the cysts may form again in three days.

Why is Multiple Ovulation Risky in Horses?

Multiple ovulations don’t favor horses. There are many consequences in case the horse gets twins pregnancy. The pregnancy may abort in the early stage of the pregnancy, the mare and the foal may die during delivery, or the horse gives birth to a weakling that has higher chances of dying in the first few weeks.

If the horse aborts, it may reduce fertility. In addition, the mare risks laminae inflammation, infection, trauma, and illness. These outcomes may result in the exclusion of the horse from breeding.

If the horse delivers one or both foals – a rare occasion – the mare and the foals are at risk of losing their lives or the mare having many complications. The twins don’t grow to the expected size and weight.

The complications call for early pregnancy detection to determine if it’s twins or not. Early twin management reduces the loss and complications. So, why can’t horses bear twins?

If a horse has two embryos, they will share one uterus horn, or each has its own. Thus, if they have to share a horn, chances are they will lie together in one position. That will lead to one embryo dissolving in the early weeks of pregnancy.

Dissolving is rare if the embryos are separate. They will survive since both are obtaining the necessary nutrients. As they grow to fetuses, they will try to stay on the little nourishment that caters to both of them.

The uterine floor design can only hold enough oxygen and nutrients for one foal. If there are two, the nourishments get lesser as they grow. Finally, the nutrition depletes, and they starve to death.

Its believed to be why aborting occurs in the late gestation period. Additionally, abortion may be due to the dissolving embryo that isn’t in contact with the uterus. But in the latter, one fetus may survive.

One Foal One Horse

We have seen that twin reduction can maintain the pregnancy, and early for that matter! This procedure is even better if you perform an ultrasound test after breeding, around 14 to 16 days. But maintaining the pregnancy is still risky.

Crushing is the best and easiest method to get rid of an embryo. It best applies to calm horses whose rectum is flexible. It’s manual where the vet reaches the uterus and crushes the embryo by hand.

However, the crushing process may lead the horse into heat. The veteran has to provide the mare with anti-inflammatory medication to prevent this. No more drugs are allowed at that period so that the medication may yield excellent results.

Though crushing is suitable for separate embryos, the procedure may terminate the pregnancy if applied to those sharing one uterus horn. If you crush one, you kill all!

In a case of a joint embryo, the veterinarian can provide prostaglandin medication that terminates the pregnancy. The mare gets on heat and is ready to conceive.

Risks of a Horse Having Twins

There are many more demerits than benefits of a horse-carrying twin. That’s why it’s rare and results in death in many cases. Here are some of the detailed risks why a horse should not carry twins:

With all the ills of containing two foals in one womb, it’s best to get rid of one embryo and give the stronger one a chance to survive. There is always a higher percentage of a healthy foal and horse.

How to Prevent Multiple Ovulations

A low percentage of horses can experience double ovulation, in which half of the population can bear the pregnancy. Most of them end up aborting, and almost 1% of that will successfully deliver.

If a horse delivers twins successfully, chances to bear another twin pregnancy are usually high. With the many twin pregnancy complications, most horse owners prefer terminating the pregnancy or preventing it from happening in the future.

There are many ways of minimizing chances for a horse to bear twins pregnancy. But there is none approved as the best method. However, the approved solution is detecting the pregnancy early.

Thus, reduction needs to be early when the embryo is still immature. In addition, an ultrasound test will help with the detection, including identifying additional problems with the pregnancy.

Is a Horse Limited to the Number of Foals?

Horses less than twenty years are usually highly fertile. Their pregnancy lasts for eleven months; therefore, they can give birth to one foal every two years.

When a horse is twenty-three years old, and above, the fertility rate is usually low. They become broodmares, i.e., they can help neither breed nor conceive anymore.

A horse can give birth to non-identical twins. However, it’s a rare and dangerous occasion for both the mother and the foals. A horse has a uterus that is only capable of nurturing one foal. A vet can remove one of the embryos. However, that’s only possible if you detect the unwanted being foal, which reduces any future complications.